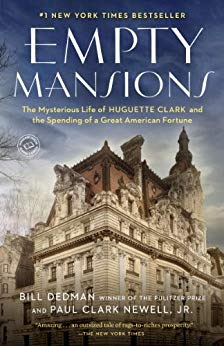 This is my 123rd read for the year

There is going to be a review for a few "off challenge" books in a row.  We were recently on vacation and I decided to take along a few books I have been wanting to read.  This book was recommended to me by a family friend.  The Clark family originated from Connellsville and that is where I grew up.  It is always amazing to me to see our little corner of the world in a book.

This is the true story of Huguette Clark and her family.  The Clark family made their millions on copper in the late 1800s.  Huguette was the youngest child of W.A. Clark.  She was born in 1906 and lived until the age of 104.   Even thought Hugette had several houses all over the country, and over 300 million dollars to her name, she spent the last 20 years of her life living in a small, hospital room at a local hospital in New York City.  Even though she was healthy, she refused to move back to her sprawling New York City apartment.

The book covers the years from when W.A. Clark was a child, through how he made his money, his two wives and his many children.  W.A. Clark was on par with the Rockafellars and Carnegies in terms of wealth and eventually built a 121 room house in NYC.  The family owned valuable paintings from famous artist, several stradavarius violins, and countless priceless items.

Huguette spent a large part of her life living as a recluse, yet being generous with giving her money away.  She gave away large amounts to her favorite nurse and people close to her.  She gave her most expensive Violin away (priced at 6 million dollars) to someone she knew who wanted to start a string quartet.  The amount of money she had in liquid cash, not to mention in real estate and valuables, was mind blowing.

I really enjoyed this book.  I had a hard time putting it down to do other things.  I became invested in the story.  The book is well written, and well told.  Huguette lived through so many things - the sinking of the Titanic (which she and her family were supposed to be on once it reached the United States), two World Wars, 9/11.....just an incredibly long life.  And one where she was clear and generous until the end.

I did feel like she was taken advantage of, especially by her nurse and her family, her lawyers, and even the hospital administrators.  Huguette had interest that many would consider immature - or even concerning - late into her life.  For example - she collected dolls, and doll houses.  Spending 100s or 1000s of dollars on them over the course of her life.  For those of us who cannot ever fathom seeing that much money in our lifetime, it is hard to understand spending it on things we might consider frivolous.

I encourge you to read this book.  It was really wonderful and I am so glad our friends introduced it to me.