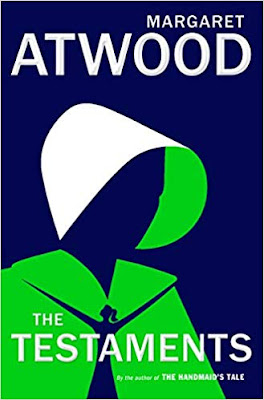 I was anxious to read this one, so I broke my own (set) rule of reading only 25 pages a night, and read late into the night to get it finished over a few days.

This book takes place 15 years in the future after The Handmaid's Tale.  Gilead still has a grip on its society, but the inner circle is begining to crack.

These three women, along with others who are working in an undercover group called Mayday, are determined to bring Gilead to its end.  But their success is fragile.  The women need to decide how far they will go to change things.

I liked this book.  Better than I thought I would.  I think what I liked about it was that 1) it took place quite a bit into the future - not right after Handmaid's Tale ended.  2) it wasn't like the TV show (which I haven't loved).  3) That women who were part of this world decided it was time to fight for change.

I am glad I read it.  Is it top literature?  No.  But I really hadn't liked the Handmaid's Tale (more on the fact that the content disturbed me and with today's political climate - made me nervous), so this was a better "end" to what I am assuming is this book series.

Posted by PletcherFamily at 4:28 PM