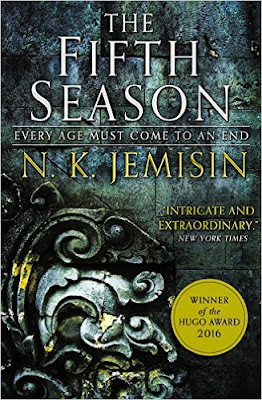 This is in the category: First Book In A Series By A Person Of Color

This is a story that takes place in a world called "The Stillness" which is a world that has suffered many different seasons and catastrophes.  The story is told by three different narrators who are known as orogenes - people who have power to move the earth.  Orogenes are not well admired or liked.  Most of them have to be trained to control their powers, and some are in hiding pretending to be something different than they are.  The story starts with Essun - whose husband has just murdered their son and run off with their daughter.  She starts on a journey to find her husband and daughter during a time when a seismic activity has just happened and a new Season begins.  Her story is told along side Syenite a young orogene who is becoming more powerful and is on a journey with the most power orogene alive, and Damaya who is a child orogene who was just discovered and brought to the Fulcrum to begin her training.  Over the course of the book, their stories converge but not in the way you were expecting.

I liked this book.  Didn't love it.  I have a hard time with authors who make up words for the sake of making them up.  It is like they are trying too hard to develop a world.   The stories of the three narrators jumps around quite a bit as well.  Especially for Syenite's character.  We find out she is pregnant, and the next thing - it is two years later.  She jumps forward quite a bit for two of the narrators, but not so much with the third.  The story gets bogged down with her crazy words and technical speak.  I really wanted to like it - I am usually a fan of post-apocolyptic fantasies.  But this one just didn't work.

Stars: 3
Posted by PletcherFamily at 2:56 AM