The Story of Jane 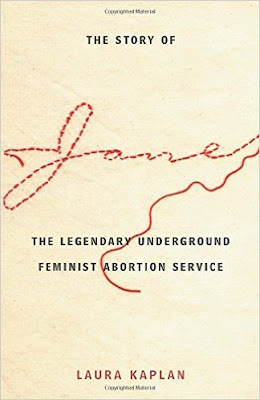 This book was under the category:  A Book About Feminism

This is the true story of the underground abortion group from the late 60s, early 70s called Jane.  In a time before abortion was made legal by Roe vs. Wade, women had nowhere to turn if they found themselves with an unwanted pregnancy.  The women in Jane wanted to help these women and promote a feminist movement at the same time.  The wanted to have control of their own lives and their own bodies, and not have the government dictate what they could/could not do with a private matter.  By the time Roe vs. Wade made abortion legal, Jane had helped several thousand women get health care they could not have gotten without this group.

I know this is a controversial issue, and no matter which side you stand on - this was a good book.  It has a lot of good points about the way women were treated mid-century and how we are still fighting a lot of battles still today.  It took a group of women to say "no more" to make changes in this country in relation to women and their bodies.  You simply cannot shut out people because you feel differently than they do - there are two sides to every story.  It was a good book and told well.  You saw the positive aspects of the group, but also the side where many women came and went from the group over the years due to changes in the hierarchy.

Worth a read - check it out.

Stars: 4
Posted by PletcherFamily at 1:22 AM