Today I am reviewing the LAST book that was in a category for 2016.  (73 categories, and 2 "extra books" is what I wanted to read this year).  I cannot believe I made it!  And still a month to spare - so I will be adding a few more books I am sure before the year ends.  We will see how that goes - December is a busy month. 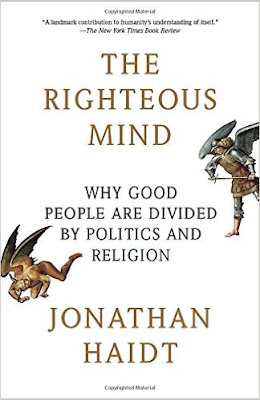 This was under the category: A Book Involving Politics

This book was written by a social psychologist who tries to challenge conventional thinking about politics, morality, and religion.  His life's work was on morality, and he sets out to prove that judgement arise from not only reason, but from personal feelings.  He talks about how liberals and conservatives have such different views on right and wrong.  What he proves is that both sides are actually right about their central concerns.

This book was just okay.  I actually had a hard time with a lot of it because it read like a drone manual.  Just a lot of.....blah.  It would get very wordy and very technical, but never really went anywhere in large sections of the book.  There were a few things that were interesting spattered here and there in the book, but for the most part.....I just worked to get it over with.

I don't recommend it.  I think there are probably better books out there about the divide of religion and politics.  This one just never really did much and took too long to get to the point in most chapters.

Stars: 1
Posted by PletcherFamily at 2:19 AM