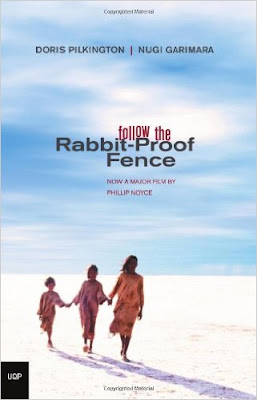 This was under the category:  A book that takes place on a continent that isn't America or Europe

This is the true story of three young Aboriginal girls who were taken from their families and put in a Native Settlement in Australia.  The reason they were taken was because they were "half caste" (their fathers were white), and they were being forced to be "made white".  They were 100s of miles away from their families, but they decided to escape.  The knew there was a rabbit proof fence that would lead them back home, and if they found that, they would get back to their parents.

This book was very poorly written.  It was unorganized and confusing and I had a very hard time getting into it.  It took half of the 160 pages to even get to the story of the girls, and then it raced through their escape and return home.  The book was so jumbled that I was sure it was written by a child.  There is no plot development, no character development.....it was just a jumbled mess.  The author switched back and forth between using Aboriginal words and English words, but never really takes the time to explain what the Aboriginal words meant.  She wrote it as if all readers would know what she was talking about.

Stars: 1
Posted by PletcherFamily at 2:26 AM