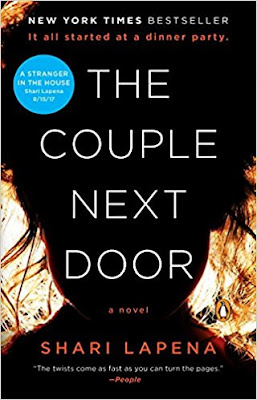 This is the story of a young couple named Marco and Anne.  They have a young baby, named Cora.  One night, while Cora sleeps, Marco and Anne go next door to a party with their neighbors.  Anne is reluctant to leave the baby home alone, but the sitter canceled at the last minute.  Marco talks Anne into taking the baby monitor - they can hear Cora if she fusses while she sleeps, and they agree to take turns checking on her every half an hour.

They return home after the party to find Cora missing from her bed.  The front door was left open but no signs of forced entry.  Frantic, Anne immediately calls the police and this starts an investigation into where the baby has gone.  Everyone is a suspect - the parents, the neighbors, a mysterious stranger.   Anne and Marco will do anything to get Cora back alive even if that means lying to protect their past secrets.

This is an okay book.  It was a fast read - I didn't want to put it down until I found out who did it.  None of the characters are particularly likable - the only one I felt bad for was the baby.  The title doesn't make much sense to me, honestly.  The couple next door - are they talking about Marco and Anne?  Are they the couple?  Or are they talking about their neighbors - whom they went to the party with?  That doesn't make much sense either because the husband of that couple is barely in the book.  And the wife - just a bit.  Just an odd title choice.

It was fine.  If you are looking for something to pass the time on an airplane or on the beach, then this would be a good book for that.

Stars: 3
Posted by PletcherFamily at 1:20 PM