60 books!!  This a record for me by this time of year.  Thank you long tram rides. 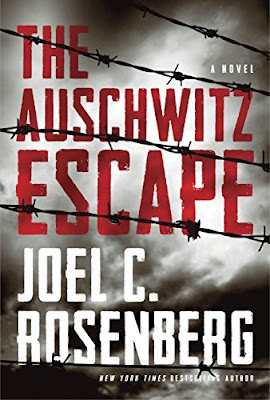 This is the story of Jacob Weisz.  He flees Germany to join the underground resistance during WWII.  In the process of trying to help prisoners on a train escape, he gets locked in and finds himself on his way to Auschwitz.  Because he isn't accounted for, a man on the train gives him his son's name, so that when he gets to the camp, he won't be shot immediately.

While at Auschwitz, Jacob is pulled into a group of prisoners who are planning an escape to tell the outside world what is going on in the camps.  He becomes friends with a man name Jean-Luc Leclerc who is a Christian who was imprisoned helping Jews.  They become a team when escaping Aushwitz, and are on a mission to tell the West what is happening in Poland.

This was a really good book on a lot of levels.  For one - it has an amazing quote.  One of the best I have ever seen:

"If you ask me, the question shouldn't be 'Why are you, a Christian, here in a death camp, condemned for trying to save Jews?' The real question is...'Why aren't all the Christians here?'"

The story, as always, it heart wrenching.  What was witnessed inside these camps, and how the outside world was lead to believe that nothing was happening inside these camps but hard labor, is almost hard to imagine.

But - on the other hand.....this book was a bit preachy.  It geared a bit more toward the religious differences between Jews and Christians and Bible passages that it took away from what I believe was the real story - the horrors of Auschwitz.  I think this book could have been a couple hundred pages shorter and still been excellent if you take out the unnecessary religious spin.

It was worth the read.  And you can always skim the heavy religious sections to get to the more detailed story.  You can tell the author did his research regarding the camps.  So it might be something you don't want to miss.