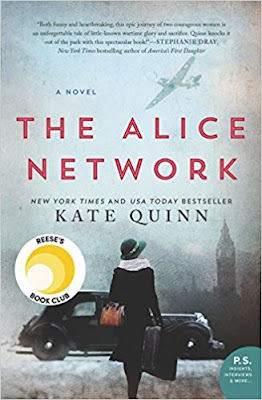 This is the story of two women - Eve and Charlie.  The time line flips back and forth between the early 1900s when Eve was a young girl who was recruited to be a spy during the first world war, and the late 1940s after the second world war.  Charlie - 19 years old in 1947 is pregnant, single, and looking for her lost cousin Rose.  Her mother and father want Charlie to "take care of" the baby, and put her on a train to Switzerland to have it done.  But Charlie isn't sure that is what she wants.  While traveling with her mother, she sneaks away because she wants to find her cousin, Rose.  She meets Eve and begs her to help her find Rose.  Rose is now an older woman, in her 50s.  She is drunk most of the time and not really looking to relive the past.

Charlie proposes money and will pay for the whole search, and mentions a name that Eve knows.  Eve agrees to help Charlie.  While together, Eve starts to tell Charlie of her time as a spy, and the mission launches them both in a direction they aren't sure they want to go.

This was a good book.  There are pieces of true history (The Alice Network and one of the characters who was truly in the Network, plus a bombing that really happened during the second world war) mixed in with fiction that made the story a good read.  One half of the book takes place in 1915, and the other in 1947.  The part during WWI is definitely the stronger of the two in this story - better written and more interesting.  The story of the Alice Network is fascinating and learning what these women did to save 100s to 1000s of lives was amazing.  The second half of the book was a little trickier to like.  Charlie and the male "love interest" did not add much to the story, and neither were really likable or realistic characters.

Don't skip it - I think it is worth a read especially the parts about Eve and the Alice Network.  The evil characters are truly evil, and once again the horrors of those wars are brought to light.

Stars: 4
Posted by PletcherFamily at 2:59 PM