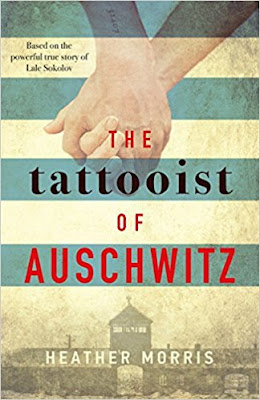 This is the true story of Lale Sokolov who was a concentration camp survivor.  The author tells his story of what it was like for him during the 3 years he was in Auschwitz.  He was chosen to be the Tattooist who tattooed the numbers on the prisoners each day when they came to camp.  This job helped him stay alive during those three years.  He also befriended people who came to the camp to work each day who would bring him food that he could share with other prisoners.  He helped saved the lives of many while he was in camp, and when he was finally liberated, he was able to marry the love of his life (whom he met in the camp).

I have had this on my list and was excited to read it.  It was chosen as a book "not to miss this year".  The story is unnerving.  I have read quite a few stories - fictional and non-fictional - about WWII and what the Nazi's did, but this was by far the most bleak.  I was horrified by what Lale reported from first hand eye witness inside the camps.  The attitudes of the guards, and even the doctors.  That people who treat other human beings this way is something I will never understand.  How they would shoot people for no reason other than because they felt like it.  That even when they were liberated from the camps, they still were not free.  It took Lale awhile to get free of being a prisoner and find Gita - his soon to be wife - and start a real life.  They moved away from Slovakia - where they were from because they needed to escape.

The writing wasn't particularly great, but I encourage you to look past that to hear this story.  I read a few days ago that the Holocaust is being forgotten.  But how can that be?  It can not be forgotten - we cannot afford for something like this to ever happen again.