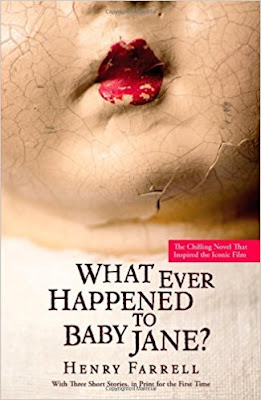 This is a story of two sisters.  Jane was a star as a young girl (think Shirley Temple).  Then along came her younger sister, Blanche who was prettier and more talented.  She started to get a lot of acting jobs and a lot of attention, and Jane was pushed to the side.

One night, Jane and Blanche are in a terrible car accident and Blanche is left paralyzed from the waist down.  Everyone blames the accident on Jane - saying she caused it because she was jealous of Blanche's success.  Over the last 20 years Jane has been caring for Blanche - closed up in Blanche's mansion.  But Jane is unstable, and still holds a long grudge of Blanche's success.  Things start to go downhill for the sisters.  As Blanche tries to get outside help to get her away from her unstable sister, Jane becomes more dangerous.

This book was not that great  It wasn't entertaining, and it wasn't well written. I know it was written in the 1960s, but it just wasn't that suspenseful.   It was predictable, and none of the characters very likable.

I don't recommend it.  I was glad to be finished with it.