Book: 32 Yolks: From My Mother's Table to Working The Line
Author: Eric Ripert
Pages: 256
Book Takes Place In The Country: YES (some)
Author is from the country: YES (partly)
I have visited: NO 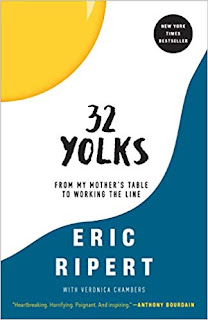 32 Yolks is my second book in 2019.  I finished reading it on Janaury 3rd. Another short, easy read to start my year off at a good pace.  I always get a lot of reading done the first week in January while the kids are on holiday from school and we have long, leisurely days.

This is another non-fiction book.  The author tells the story of him growing up in France and eventually Andorra.  Early in life, Eric developed a passion for good food and fine restaurants.  An only child of wealthy parents, he was often treated to fine dining either at home or in public.  His parents would often seek out Michelin star restaurants to try, and Eric knew that one day, he wanted to be a chef.

Eric's parents divorced when he was 6, and his mother married an often cruel man who had little patience for him.  At 11, Eric's biological father died of a heart attack.  At 16, Eric enrolled in culinary school to further his passion for cooking and also to escape his step-father.  From then on, his life seemed to move at a fast pace toward an inevitable end.  He worked hard, and soon found a job at a Michelin star restaurant in Paris.  The head chefs were cruel and unforgiving, but Eric states that this made him nothing but better.  He put up with the abuse knowing that what he was learning was bigger than the cruelty he endured.

When Eric was in his 20's he was given an opportunity to move to America.  Today, he owns his own 3 star Michelin restaurant in New York City. ( Le Bernardin) He never returned to Androrra or to France to work, making America his home.

This was a pretty good book.  It was an easy read, and I found it well written.  (The author does admit to having quite a bit of help with the writing - his co-writer mostly listened to him tell stories while he worked at the Le Bernardin).  It covers his childhood and mostly his time as an apprentice chef in Paris.  I was disappointed that it didn't cover him getting where he is today in his restaurant.  The book drops off after he goes to America, and says nothing more about his rise to his own personal fame.  I found this a pity.

The other thing I am struggling with is that this book takes place than half the time in Andorra.  Granted - Andorra is a very small country of less than 50,000 people, so not a lot is being written about the area.  But I was hoping for more since Good Reads listed this as a book from there.  I am going to keep in on my list for now as the Andorra choice, BUT I may continue my search to see if I can find one that takes place more in the country itself.

As for the book - I say take a look.  It will make you hungry and want to seek out top notch restaurants to taste what he describes.