Book: Three Cups of Tea
Author: Greg Mortenson
Pages: 349
Book takes place in the country: YES
Author is from the country: NO
I have visited: no 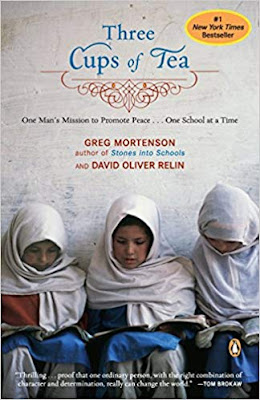 I read this book in 2017 as part of my reading challenge.  It was under a category "A Book In A Country I Know Little About".  I have not read a lot about Pakistan, so when my mom recommended this book, I wanted to try it.  I fell in love with this true story immediately.  However, it has gotten some negative press lately (there are rumors that some of it isn't true).  And when I brought it up to the reading groups that this was my Pakistan group, they agreed I should continue to hunt for something else to read for this country.  But for now, because I did love the story, I am keeping it.