Book: Into Thin Air
Author: Jon Krakauer
Pages: 332
Book takes place in the country: YES
Author if from the country: NO
I have visited: no 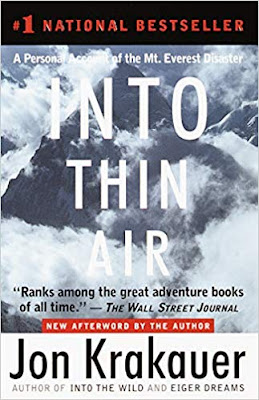 I read this book during my 2016 challenge.  It was a book that came out the year I was born, and I didn't realize at the time that this story was that old.  I loved the book - it is griping, and terrifying.  And there is a movie, so that was a plus.

I am keeping this as my Nepal book for now, but things may change in the future.  While this takes place in Nepal, it is truly the story of Mount Everest and the people who lost their lives.  I may search for a book more about the country of Nepal itself.  We shall see.

And the Sherpas.  The people who live at the base of Everest who are hired to go on these climbs and set the ropes and carry the loads and care for the people who paid for these trips.  There are no words for how awful their jobs are but how they don't see it that way.  These mountain climbs are things of honor for them, but I felt nothing but terrible for them.