Extra Book - Part Of Your World 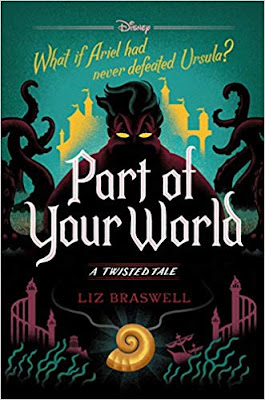 I do still enjoy reading to my children - even though my youngest is 13 years old.  I don't think they will tolerate it much longer, but I do hold out hope that we can get through this Disney Dark Fairy Tales before they quit on me.

This book takes place 5 years into the future from when Ariel lost her voice to the sea witch.  Instead of the happily ever after ending like we see in the film, Ariel never regained her voice and Ursula (as Vanessa) is now the Princess of Trulia.  Prince Eric has remained under her spell for 5 years - as well as members of his staff.  Ursula is trying to rule the Dry World and trying to figure out how to destroy the Mer World.  She still has King Triton as her prisoner.

Ariel - now Queen of the Sea - has ruled in silence for 5 years.  With the help of sign language, Sebastian and Flounder, she has kept the peace.  But the time has come for her to try to return to the Dry World and rescue her father, and defeat Ursula.  She has to figure out how to do all of this without being able to speak.  Wtih the help of her friends - both on land and in the sea - she has a real chance of defeating the Sea Witch.

This was another great installment of Disney's Dark Fairy Tales.  This author is a great writer and story teller.  We have really enjoyed the spin of some of our favorite Disney Classics.  This one - at almost 500 pages - took us awhile to read (we only read a chapter or two a day) but it was worth it.  It ended beautifully after a clever tale of heroes, friendship, and love.  We are so glad we read it.