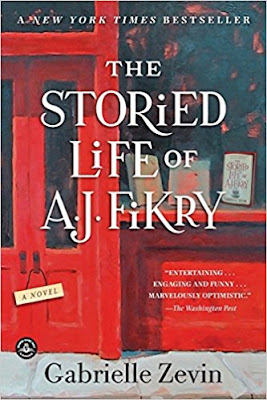 AJ Fikry is a single, middle aged book store owner on a small island called Alice Island.  His wife died two years ago, and he spends his days holed up in his book store and his nights in his small apartment above the store.  One day a woman named Amelia comes into his store to review some books that her publishing company is pushing that season.  She is met with a very grumpy AJ who tells her that he is used to dealing with people who know what he likes and doesn't have time for her list.

AJ has a very old and valuable book that he keeps in a secure vault in his apartment.  One night, while he is feeling particularly vulnerable, he takes it out when he is having a drink.  He passes out and when he wakes up, he finds that the book has been stolen.  Even though the police try to find it - the book is never located.

A few days later, a 2 year old girl is found crying, and alone, in his bookstore.  She has been left with a note that her mother can no longer care for her, and she wanted her daughter, Maya, to grow up a reader.  So she left the little girl in AJ's care.  AJ has no idea why, and while the police are trying to find her mother, a body of a young woman washes up on the island.  It is discovered that it is Maya's mother.  AJ - even though he knows nothing about babies - decides he cannot let the little girl go, and decides to keep her.

The book then starts taking leaps in years, instead of months, with each chapter.  Maya grows up.  AJ meets a woman and gets married.  His book store, still the center of his life, remains open and thriving, and he attributes that to having Maya come into his life when he was at his lowest.

Tragedy strikes, and soon AJ needs to make a choice for him and for his family.  He wants to make the right decision to insure that his daughter and wife always have what they need.

This was a great, but very short, book.  I really enjoyed it.  There was a little humor, a little sweetness, and a little real life neatly wrapped up in under 300 pages.  While each chapter jumped ahead years instead of days into the future, I didn't find that it took away from the story.  I do find that some books can get overly wordy and detailed just to make them longer.  But it often isn't needed.  I didn't close the book wondering about anything and wishing I knew more about any one character.  I think it was just the right amount of story.

I recommend checking out this book.   There is a little bit of predictability, but not overly so.