I am on vacation and trying to get in some extra reading time.  But I have been running around as well, so not as much reading as I would like! 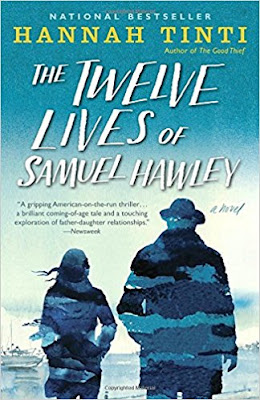 Samuel Hawley is a single father of a girl named Loo (Louise).  He has been her sole caregiver since she was less than 1 year old.  Loo has no memories of her mother, and her dad rarely talks about her.  He keeps pictures of her in the house, but hidden from visitors.  Loo and Samuel have spent most of Loo's life on the run.  Moving from town to town.  Samuel's past is always chasing him, so he ties to keep ahead of it.  Now that Loo is a teenager, he wants to give her a more stable life.  So he settles in his late wife's hometown and begins steady work.  Loo becomes more and more curious about the mother she never knew, and meets her grandmother for what she assumes is the first time.  Her grandmother has never approved of Samuel, but she is willing to let him back in her life so she can be a part of Loo's.  Loo begins to piece together her father's past by the scars - all 12 from bullets from his criminal past - he has.  His past has come back for him, and this time Loo is caught in the middle.

This was a good book.  I cannot imagine being shot 12 times and surviving to tell about it.  Hawley's past is a big part of this book - almost each chapter a story of how he received a scar.  But woven in there is the story of Loo and her grandmother, and Loo's mother before Loo was born.  The book did end a bit abruptly - like books sometimes do - but that is never my favorite.  I like a nice clean break, but alas, I didn't get it here.

Posted by PletcherFamily at 1:50 PM