2018 Challenge - Book #46 - The Amazing Adventures of Kavalier and Clay

Two reviews in a row!  That is because I have been working on Kavalier and Clay for a while - reading 50 pages a day on the tram, and reading my other books at home. 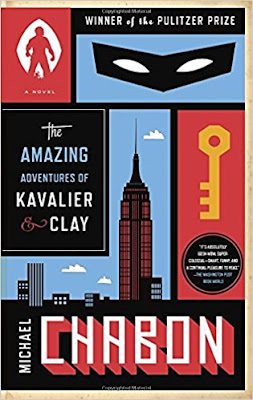 This story begins in 1939 in New York City.  Sammy Klayman lives as an only child to a single mother, and one day his cousin from Europe - Joe Kavalier shows up at their doorstop after escaping his war torn country.  He is alone and scared, and Sammy does not like that this kid is not a member of his household.  Quickly, though, Sammy discovers that Joe can draw.  Sammy starts to share his love of comic books, and soon he and Joe are working together making their own comic book series.  They come up with their hero - the Escapist - based on Joe's past of being able to escape like Houdini.  Their comics soon become extremely popular.  They have their own series, their own toys, their own radio show.  Joe stashes all of the money he makes away so that one day he can bring his entire family to America.

Tragedy strikes, and Joe runs away.  For 11 years, Sammy and Joe's girl - Rosa - search for him to no avail.  It isn't until Rosa's son, Thomas, starts to disappear into New York City, skipping school, to visit a mysterious man at a local magic shop.  Soon Joe is back in their lives and everything changes for he and Sammy.

This book was.....okay.  First of all - it was way too long.  Very wordy.  I found myself skimming sometimes just because there wasn't a lot of dialogue and too much explanation.  It is a writing style - I get it - it just isn't for me.  Second of all - I did not like Joe.  His character was frustrating and extreme.  There was a fairly good size chunk of this book during the part that Joe is absent that I felt could have been eliminated all together.  Or at least shortened.  It completely derailed the story, and didn't fit.  The beginning, though, and the ending, when Sammy and Joe were together - was entertaining.  Sammy is a witty character and had some great lines.  He kept the story afloat and moving forward, unlike Joe's character.

This book is definitely for folks who love comic books.  They talk quite a bit about the comic book greats throughout this book and mix true history into the story of these fictional writers.  My husband - who is a total nerd for these types of stories - is going to read it next so I will be anxious to hear his take on it.

Stars: 3
Posted by PletcherFamily at 9:16 PM