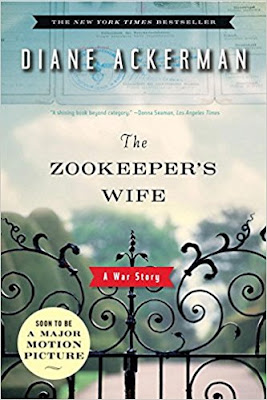 This is the true story of the zookeeper's of the Warsaw zoo in Poland.  They helped save 100's of people from the Nazi's during World War II.  Jan and Antonia Zabinski hid people during the war in their now almost empty zoo.  Their zoo acted as a sanctuary, a pass through, and an Underground escape.  The author of this book pieces together stories and recounts of the time as well as Antonia's memoirs to weave a story of what it was like in Poland during World War II.

This was a great book.  Although - I will say it drug just in a few parts when she would write a little too much about the history of animals that were once in the zoo.  But the stories of the people were fascinating.  Knowing that Poland not only suffered when it came to the Jewish, but also for just being Polish, it is impossible to imagine what happened to them.  How all of Jan and Antonia's family survived is a mystery.  And how they were not caught was another. Of the over 300 people they saves, only 5 died during that time.  Just amazing.

I am anxious to see the move and see how it plays out.

Check this book out!  It was a good one.