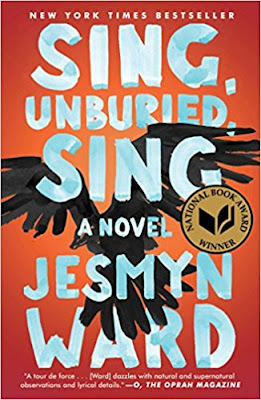 The main character in this story is a 13 year old boy named Jojo.  He is the son of a drug addict mother and his father is in jail.  He is the main caregiver of his little sister Kayla because his mother is inconsistent in their lives.  He does have a grandmother and grandfather that care for him deeply - Pop and Ma - who live with him.  Jojo's mother can't quite put mothering at the top of her list of needs above her drug addiction,  She is also tornmented by the constant presence of her dead brother, Given, who died as a teenager.

Jojo's dad is released from prison so his mom takes him and his sister to pick him up.  Jojo meets a dead boy named Richie when he is at the prison.  He was 13 when he was an inmate and carries the story of how bad the South was when he was there.  He follows Jojo and his family home, hoping Jojo's grandfather - who knew the boy as an inmate - can help release him from earth.

This was a pretty good story.  Like one reviewer stated "I appreciated it, but I didn't love it" - is how I feel as well.  The writing was fantastic.  And my heart broke for Jojo and Kayla knowing that there are so many kids in their kind of situation.  But other than that - I just didn't connect to the story.  Plots seemed to swirl around each other, and I had trouble connecting the characters to the story.

I am not saying don't read this book.  There are too many things to like about it to pass it up.  Just know that you may feel a little disconnected from the story.  Or....you may not.

Posted by PletcherFamily at 10:37 AM