Starting to slow down.  Life has started to go back to normal - so the time for reading has been less.  This week has been busier than most, lately, but with all good things.  I don't mind forfeiting reading to spend time with friends and do some hiking. 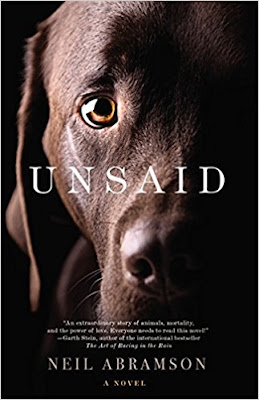 This story is told by a woman named Helena who has died from cancer.  She keeps an eye on her grieving husband and his now responsibility to care for all of her animals.  He is more than reluctant to care for their 3 dogs, several cats, pig, and two horses, but he does it for Helena.  He finally hires help so that he can return to his life as an attorney.

Enter a long ago colleague of Helena's named Jaycee.  She has been working with a chimp named Cindy, and has proven that Cindy can communicate on a 4 year old level.  Her research partners, though, don't agree because Cindy won't talk to anyone but Jaycee.  They want to shut down the program and put Cindy into an animal testing facility that would subject her to harm.

Helena's husband agrees to take Jaycee's case to help save Cindy.  He does it for his late wife and help deal with his grief.

I wanted to like this book - I really did.  I am an animal lover, and anything with a dog on the cover attracts my attention.  But this book just wasn't entertaining.  I didn't ever really like any of the characters.  Some of the science just didn't seem to be correct.  There was a little boy with Autism that seemed to have magical powers (which his mom would call "episodes").  The second half of the book is a long drawn out trail around saving Cindy, and it just droned on and on.  It wasn't that interesting, and I struggled to finish it.

I won't be recommending this book.  It wasn't TERRIBLE, but it wasn't good either.


Posted by PletcherFamily at 11:23 AM