23 books in the month of January.  Pretty proud of that number.  Don't know if I can keep up the pace, but I am going to try.  So many books out there waiting to be read. 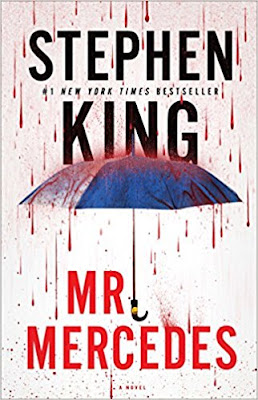 The novel opens with people lined up for a job fair.  Eight innocent bystanders are killed when a Mercedes plows through the crowd.  15 people are injured.  The killer gets away with the crime.  Bill Hodges was the cop on the case, but has recently retired.  Now he fills his days with afternoon TV and dinners for one.  He doesn't feel like he has much to live for until the Mercedes killer reaches out to him and baits him.  Hodges decides he isn't done with this case, and as a private citizen starts to investigate.  Hodges knows this killer will strike again if he isn't stopped, so he wants to catch the guy before that happens.

Typical to my buddy Stephen King - this was a good book.  I have read almost all of King's writings, and I would say 90% of the time I enjoy what he writes.  We know who the killer is right from the beginning - even thought Hodges does not - but that does not take away from the story.  The book is about the chase to see who is going to come out ahead - the ex-cop or the killer.

This is a trilogy, so I think I will read the next two books.  I am anxious to see where the story goes.  (yes - this book ends on a bit of a cliffhanger).


Posted by PletcherFamily at 7:55 PM