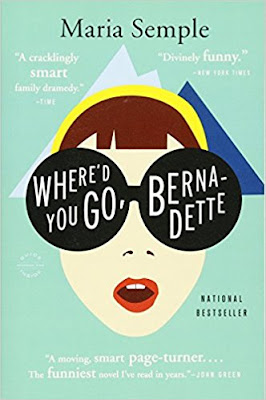 Bernadette Fox - a McArthur award winning architect has moved with her family to Seattle.  They own an old girl's school that they always planned to fix up, but never got around to it.  Bernadette is an introvert genius who doesn't like to be around people.  Most of all, she despises the mothers (she calls gnats) at her 15 year old daughter's private school.  Her husband is a Microsoft big wig and the complete opposite of Bernadette.

Their daughter gets into a prestigious boarding school, and as a present, she asks her parents to take her to Antarctica.  They agree, but as the trip nears, Bernadette starts to panic about being on a boat with people she doesn't know.  She enlists the help of an online assistant to help her book the trip and do errands for her.

Then one day, Bernadette disappears without a trace.  It is right before the family was supposed to go to Antarctica.  Her daughter, Bee, begins to try and piece together where her mother went, and figure out who her mother was.

This was a good, but strange book.  All the characters are a bit strange, and some very unlikable.  (although they are supposed to be unlikable).  Bernadette - the strangest of all - is a big of a rambler, and it is hard to follow the dialogue sometimes.  The book is a series of emails, letters, and correspondence among the characters, which is a unique set up.  It is a bit of comic satire, and I did chuckle at some of the dialogue.  The ending is a bit long and drawn out with a letter from Bernadette to her daughter.

I think I can recommend this book.  It is eccentric and you might find yourself shaking your head at the characters, but it is entertaining enough not to miss.