I am going to veer from the challenge in this post because I read a book in October that wasn't part of my 50 book challenge.  I read it because my husband and I were taking a trip to New York City at the beginning of November to see this book performed as a stage play.

The book was called:  The Curious Incident of the Dog in the Night Time 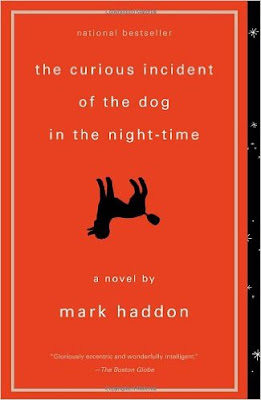 Here is what Amazon says about this book:

Christopher Boone, the autistic 15-year-old narrator of this revelatory novel, relaxes by groaning and doing math problems in his head, eats red-but not yellow or brown-foods and screams when he is touched. Strange as he may seem, other people are far more of a conundrum to him, for he lacks the intuitive "theory of mind" by which most of us sense what's going on in other people's heads. When his neighbor's poodle is killed and Christopher is falsely accused of the crime, he decides that he will take a page from Sherlock Holmes (one of his favorite characters) and track down the killer. As the mystery leads him to the secrets of his parents' broken marriage and then into an odyssey to find his place in the world, he must fall back on deductive logic to navigate the emotional complexities of a social world that remains a closed book to him.

I loved this book.  It was smartly written, and really gave you an idea of what it would be like inside the mind of a person who is autistic.  At one point Christopher says "this book will not be funny.  I cannot tell jokes because I do not understand them".  I have cared for several higher functioning kids over my nursing career, and this has been true for all of them that I know.  These kids didn't get jokes.  And they didn't understand sayings like "that is water under the bridge".  Those kids had me thinking on how to communicate to them so they would understand and be comfortable.

The autism world is complex.  There is side a spectrum that I would never begin to believe that you could lump all autistic people into a certain set of characteristics.  But this book did a great job in showing what it was like for Christopher - a person with autism.  And the play was fantastic.


Posted by PletcherFamily at 3:39 AM