The next book I am revewing: The Bell Jar (read in September 2015) 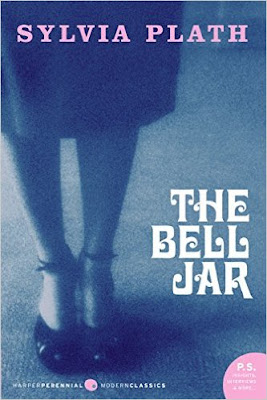 This book was under the category:  "A Book Written By Someone Under 30"

This was a story of a young girl, Esther, in the 1950s who was interning at a junior editor for a NYC magazine.  She does the internship, and then finds out that a story she submitted to get into a special writing class has been rejected and that seems to be the beginning of her downfall.  She slowly has a mental breakdown and has to return to living with her mother after the internship instead of returning to school.  She attempts suicide and lands herself in a mental institution.  She has electroshock therapy while she is there and a friend of hers is also admitted.  Her friend ends up killing herself and this seems to turn something in Esther and help lead her to recovery.

I liked this book well enough.  It was a little confusing at times.  To me it seemed the Esther went from being perfectly fine to attempting suicide rather quickly.  But the overall book was well written.

The notes at the end of the book were the most helpful and understanding the book.  Sylvia Plath, the author, killed herself at a very young age.  Many people speculate that the story of Esther rivals Sylvia's own path with depression.  This is the only book she ever wrote.

Posted by PletcherFamily at 2:40 AM