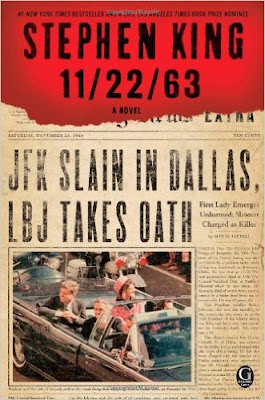 This was in the category:  A book with more than 500 pages

This book had 849 pages.  Overkill Stephen.

"Life can turn on a dime—or stumble into the extraordinary, as it does for Jake Epping, a high school English teacher in a Maine town. While grading essays by his GED students, Jake reads a gruesome, enthralling piece penned by janitor Harry Dunning: fifty years ago, Harry somehow survived his father’s sledgehammer slaughter of his entire family. Jake is blown away...but an even more bizarre secret comes to light when Jake’s friend Al, owner of the local diner, enlists Jake to take over the mission that has become his obsession—to prevent the Kennedy assassination. How? By stepping through a portal in the diner’s storeroom, and into the era of Ike and Elvis, of big American cars, sock hops, and cigarette smoke... Finding himself in warmhearted Jodie, Texas, Jake begins a new life. But all turns in the road lead to a troubled loner named Lee Harvey Oswald. The course of history is about to be rewritten"

I took the above from Amazon's review because I think it explained this large book best.  For me?  Stephen King is not a very good writer.  How in the world he has gotten so popular, I will never know.  I have read many of his books, and none of them I really like.  I understand from reading things about Mr. King is that he kind of writes without vision and just plows ahead to make a story.  And not a very good one.

This one isn't worth your time.  It made me roll my eyes a ton of times.  The best part of the book was the end (which is shocking really) because it showed us what would happened if we mess with the past.  That was the most interesting part of the book.  The other 800 pages?  Eh.

This book gets 1 star.

Posted by PletcherFamily at 2:27 AM