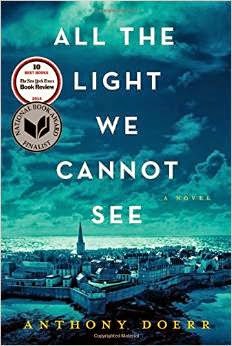 This book was from my 2015 Reading Challenge category: A book set in a different country

This was a great book.  I had a hard time putting it down, and  - even though it was over 500 pages - I finished it in a few days.  Did I ignore a few house chores to read instead?  Yes.  Yes I did.

I wish I would have read this before we traveled to Paris this summer.  I could see some of the places they talked about, and I think I would have tried to include Saint Malo into our trip.

Posted by PletcherFamily at 1:59 AM