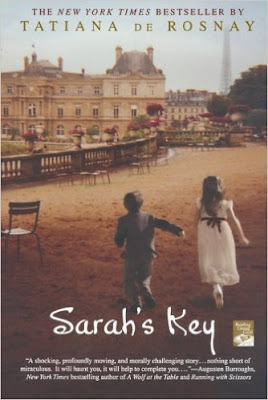 This book was under the category "Book Your Mom Loves"

This story is about the holocaust, and a little Jewish girl and her family.  The story takes place in Paris.  Her family is taken away by the French Police and taking to the concentration camps.  The other characters in the story are from the present time who are living in Paris.  The woman character is a writer for a local American newspaper and she is assigned a story of the 60th anniversary of the Jewish roundup at the Vel d'Hiv and she discovers the story of this young girl and her family.  And then their stories intertwine.

The "Key" part comes in because when the family is rounded up, Sarah locks her little brother into a hidden cupboard in the house to keep him safe.  She is sure they won't be gone long and she can come and let him out.  The truth is, that no one - except Sarah and one of her friends - ever returned from that concentration camp.

I really liked this book.  I have read several Holocaust books this year, and I had no idea about this round up in Paris.  Since we were recently there, I recognized several of the places they talked about in the book.  I wish I would have known before we visited so that we could pay our respects to those lives lost (I think it was over 14,000) from that small section of Paris.

I encourage you to read it.  It was the first story I have read this year that was told from a child's perspective (the main character is 10) of what was happening to her and her family.