Another Book - The House of the Seven Gables

I am going to keep reading, so there for - keep posting!  Still several weeks left in 2015 before the new challenge can begin, so I am cleaning off my shelves with a few books I had wanted to read this year.

Today I am reviewing the House of the Seven Gables. 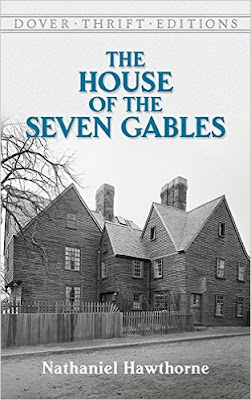 This is a story that takes place in Salem, Massachusetts at the famous House of Seven Gables.  The story is fictional, but the house is not.   The story takes place in the 1800s, 200 years after a tragic death of is original owner.  The story is about the (fictional) Pyncheon family.  The story is that the house was built on land that was swindled away from its rightful owner, Matthew Maude, by the local Colonel Jaffrey Pyncheon.  After he took the land from Maude, he had Maude executed for witchcraft.  (which is what Salem is known for).  However - before Maude was executed, he placed a curse on the entire Pyncheon family.  The Colonel wasn't phased by the curse and he built the house on the land.  The Colonel even hired Maude's son - who was a carpenter - to build the house.  At the grand opening, Colonel Pyncheon is found dead at his desk from an unknown cause.

Fastforward 200 years, and we meet Hepzibah, one of the last remaining heirs to the Pyncheon's fortune (which isn't much of a fortune at all at this point).  The Maude's curse continues to bring bad luck to the family with an alleged murder of Jaffrey Pyncheon IIs by his nephew, Clifford.  Clifford appears in the story after spending 30 years in prison for this accusation.  (which was a murder he did not commit)  He is the last of the Pyncheons that has first hand knowledge of the family's secrets.  He returns to the House of the Seven Gables to be cared for by his sister, Hepzibah.

Clifford supposedly knows of a deed that was hidden by the original Colonel Pyncheon for miles and miles of land in Maine.  An uncle appears - Judge Pyncheon - wanting to question Clifford on the deed and where it is hidden, so that he can take the land for himself.  The deed is never found, and the uncle is found dead in the same place Colonel Pyncheon was those many years ago.

In the end there is a wedding that seems to rid the house of evil spirits.  But in the end, the Pyncheons move away from the home to find peace.

This book was written in 1850, so if you have a hard time with language at that time, this book is not for you.  I found it difficult to read, but as long as I concentrated (and didn't try watching TV at the same time), I could get through it.  I tried to limit it to 20 pages a day so that I could take my time with it and truly understand its meaning.  The copy that I have has a notes section in the back, and that was very helpful.  It also has an after thoughts section to discuss the book on the whole, which I also liked.  Reading this book reminded me a lot of The Master and Margarita - without the added bonus to help you understand it, it would have been tougher for me to get through.

The reason I chose to read this book was because in October my family and I went to Salem, MA (which is only 45 minutes from where we live) to enjoy their Halloween festivities.  We toured the House of Seven Gables and it was fascinating.  Its true story can be found here:  http://www.7gables.org/ if you wish to find out more.  It is a great place, and I encourage you to put it on your list of "must dos".    We really enjoyed the grounds, and the house is huge.

If you are into romanticism writing, and writings from the 1800s, then I encourage you to try this book.  I understand it is not "A Scarlet Letter" (Hawthornes most famous book), but it was a good read.  I enjoyed it because I have visited the house, and loved to see what Hawthorne came up with.


Posted by PletcherFamily at 1:43 AM