The book I am reviewing is: Big Little Lies (read in August 2015) 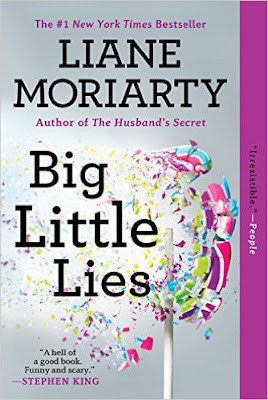 This was in the category:  A  Book with Antonyms in the Title

This book was about three mothers who had a child starting Kindergarten.  One mother was a divorced/remarried mother.  One mother was wealthy but being abused by her husband.  One mother was a single mother whose child was a product of a one night stand.  Their lives intersect and they become friends.  The whole book is leading up to a murder that has happened among the parents at the school and figuring out who was murdered and who did it.

I really enjoyed this book.  It is a good summer read and even with almost 400 pages, it didn't take me long to get through it.  After all the more serious reads I have read lately, this was a nice break.

This book made me laugh in a lot of places.  I found me thinking of people in our own school district that would fit into some of the mothers who were described in this book.  It was your typical mother vs. mother that you can't escape no matter where you live.  It had me chuckling quite a bit.