This review is for: Brain on Fire - My Month of Madness (read in September 2015) 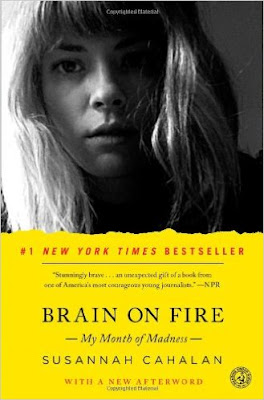 Category of this book was: A Non-fiction Book

This book is a true story of the author who was a perfectly normal writer for the New York Post one day and completely paranoid and not in control of her body the next.  The oddest part is that she doesn't remember the month at all.  She had to put together the pieces from stories from her parents, boyfriend, hospital staff, videos from her hospital stay, and friends.

This book was fantastic.  It is amazing how an autoimmune disease attacked her and what the result of that attack was.  Worst of all - it took the doctors a very long time to figure out what was wrong with her.  Up until her "lost" month, she had been having unusual symptoms and paranoia and most doctors decided she was becoming mentally ill.  The truth was - she was sick.   It begs the question - how many other children and adults have been mis-diagnosed with a mental illness when in fact they may have a rare autoimmune disease that attacks the brain and mimicks widely known mental disabilities?

I encourage you to read this book.  It was a little more "sciencey" than I thought necessary at times, but other than that - an excellent read.

Posted by PletcherFamily at 2:32 AM