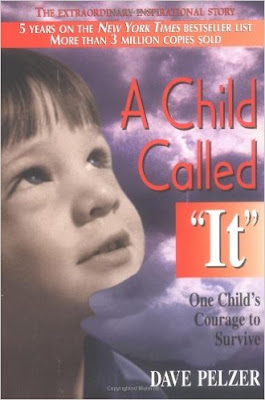 This was in the category:  A Book that will Make You Cry

This is a true story book about the author, David, who was severely abused as a child from about age 6 to age 11.  It tells the story of a child that spent most days starving, living in a cold basement, working chores until he couldn't stand, and not even being called by his name.  This became the 3rd worst case of child abuse in CA history.

I had a hard time with this book.  I was so angry reading it.  I could not even imagine how this could go on for 5 years and he couldn't get away.  He was in public school.  He was forced to wear basically the same outfit everyday.  He stole food.  He was covered with bruises.  His mother burned him and stabbed him.  And yet, it took 5 years for him to be rescued.

The "happy ending" is - David Pelzer is a full functioning adult with a family and children.  He has spoken all over the country about the abuse and promoting reporting child abuse.  But this book.  I just could not get over how awful it was.  I have been extra kind to my own kiddos because I would never want them to feel anything but love from me.  He didn't deserve what happened to him.  No kid deserves that.

Posted by PletcherFamily at 2:39 AM