The book I am going to review today is High Rise  (read in November, 2015) 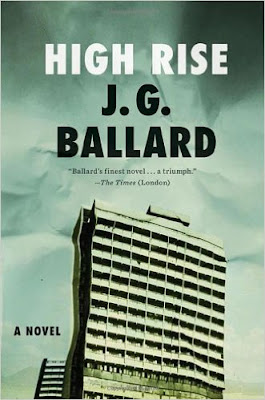 This book was in the category:  A Book that came out the year you were born (1975 for me)

Here is what Amazon said about this book:

When a class war erupts inside a luxurious apartment block, modern elevators become violent battlegrounds and cocktail parties degenerate into marauding attacks on “enemy” floors. In this visionary tale, human society slips into violent reverse as once-peaceful residents, driven by primal urges, re-create a world ruled by the laws of the jungle.

This book was......strange.  REALLY strange.  The writing was good, but the story was just weird.  The characters morals and personalities decline so quickly that is becomes ridiculous.  I assume this has a bigger meaning - class system, etc., but I just didn't get it.  It was so unlikely.  Why are they trapped? Why don't they leave?  The go to their jobs every day - but yet no one will move out or leave the building when things get bad.  Are there no other stores outside of the high rise for them to get food?  It just is so.....silly.  And it ends so abruptly it is like the author just ran out of ideas.

It wasn't for me.  I would not recommend it.  There weren't that many reviews for it on Amazon, but it was one of the few books that looked half decent that were written in 1975, so I gave it a try.