This review is for: Pride And Prejudice (read in September 2015) 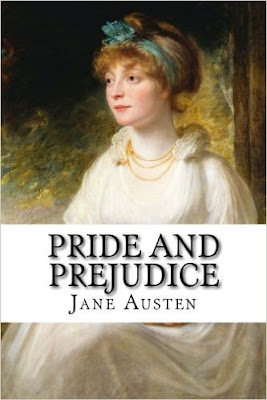 This book was under the category: A Classic Romance

From Amazon:  "Pride and Prejudice tells the story of Mr and Mrs Bennet's five unmarried daughters after the rich and eligible Mr Bingley and his status-conscious friend, Mr Darcy, have moved into their neighbourhood. While Bingley takes an immediate liking to the eldest Bennet daughter, Jane, Darcy has difficulty adapting to local society and repeatedly clashes with the second-eldest Bennet daughter, Elizabeth. "

I am probably one of that last people alive that has not read this book.  I am not a big fan of old literature (I know - for shame!).  To me it is boring, and I don't particularly like the style of writing, so I generally avoid them.  This one was.....okay.  I know, I know.  It is great literature and I should have loved it.  It was silly.  It is a comedy, yes, but so SILLY.   I am going to watch the movie, in hopes that it ties everything together.  I found myself skimming several parts where it just droned on and on with fluffy wording.

I don't know.  Don't count it out.  There were parts that I really enjoyed and read deeply.  It ended well, which helped a lot.

Update:  Watched the movie.  The miniseries, really.  That changed my mind greatly.  It put the book into better perspective.  Is it still silly?  Of course.  But the movie was good and better helped me understand the book.
Posted by PletcherFamily at 2:42 AM