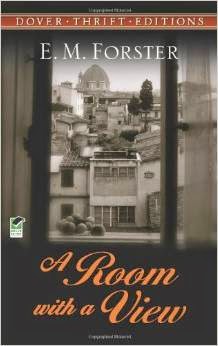 It fell under the category: A book set somewhere you have always wanted to visit

This book was set in Italy.  At least for most of the book  So I went with it.

It was an old book, considered a classic.  It was written in 1908, and if you watch Downton Abbey, you will like this book.  The language is old, and stuffy, but if you can get past all of that, there is a true love story that made me want to keep turning the page to find out what was going to happen.

The main character is a young lady named Lucy who goes on holiday in Italy and meets a man named George.  He falls for her immediately, but she goes home and becomes engaged to a man named Cecil.  But all along, you know she is supposed to be with George.  George reappears shortly after she returns from her holiday, and he professes his love for her and begs her not to marry Cecil.  It is touch and go and......well - I won't spoil it for you.

It was dry at times, and I found myself rolling my eyes, but then remembering when the book was written.  I would think of Downton Abbey, and then it would make more sense and I would move on.