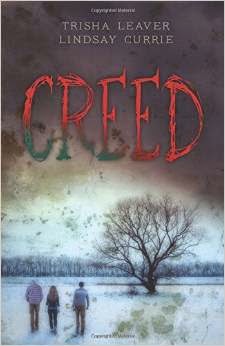 It was on my category:  "Book that Scares You"

I don't read many scary books, so I reached out to my friends to see what they recommended.  I got a huge list of books to pick from (and added quite a few to my reading list for after the challenge) but decided to go with Creed.  It sounded creepy, and - I admit - it was a bit shorter than a lot of the others.

The story was of three teenagers who were on their way to a concert in NYC and ran out of gas.  They come across a creepy town to get gas and find no one available in the town.  Everything goes downhill after that - crazy people, blood, killings.....you know - your typical scary story.

Except.....it really wasn't.  I wanted to like it.  I kept waiting for it to get "I need to put this book in the freezer" scary, but it never did.  It was actually kind of dumb.  I found myself rolling my eyes several times at the silliness of it all.  I was disappointed because I was looking forward to reading it.  It did sound good.

Ah well.  It happens.  Was it creepy?  Sure.  But not in the way I was expecting.  It was more crazy than creepy.

I give it 2 1/2 stars.  And that is probably being generous.
Posted by PletcherFamily at 2:11 AM