Do you see that?  #49!!!  I have one more book to read and I will have completed my challenge this year.  Whoo hoo. 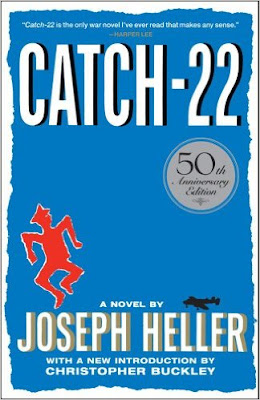 It was under the category:  A book that got bad reviews

Now for those of you who know this book, you are thinking, "uh Jennifer?  That book didn't get bad reviews".  Believe it or not - it did.  When it first came out 50 odd years ago.  It was not well reviewed first go around.  So - I used it in this category.

This book takes place in Italy during World War II.  The main character is a bombardier named Yossarian.  His biggest issue is with his own army that keeps increasing the number of missions they have to fly before they can go home.  (It started at 30 something and at the end of the book it was 80 missions).  If Yossarian attempts to excuse himself from these missions, he will be in violation of a Catch-22.  This rule is:  A man is considered insane if he willingly continues to fly dangerous missions, but if he makes a formal request to be removed from duty, he is proven sane and therefore ineligible to be relieved.  The book deals with several complex issues in a funny way such as loss of faith, death and tyranny.

I really thought I was going to hate this book.  Mat had read it and felt that I would not find the humor in it.

But I ended up enjoying it.  It had humor that reminded me of the movie "Airplane".  The dialogue went round and round and no where forward many times in this book, but that was the beauty of it.  It was classic satire.  I found myself smiling, if not giggling, several times during the book.  (especially at the character Major Major Major Major).  The absurdity of this novel has quite an appeal, and I am glad I had a chance to read it.

It is silly.  It is old fashioned.  It is a war novel.  But you simply must try it.