This review is for: The Moon Dwellers (read in October 2015) 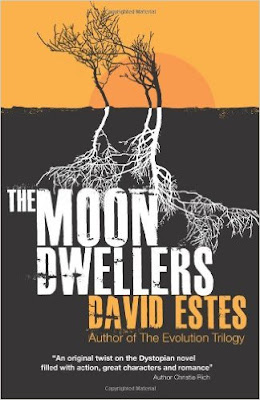 This was under the category: A Trilogy

This is the first book in this series (which, in reality - there are actually 4 books which I did not know until recently).  I am thinking about reading the rest, but we will see.

Here is Amazon's take on the book:

"In a desperate attempt to escape destruction decades earlier, humankind was forced underground, into the depths of the earth, creating a new society called the Tri-Realms. After her parents and sister are abducted by the Enforcers, seventeen-year-old Adele, a member of the middle-class moon dwellers, is unjustly sentenced to life in prison for her parents' crimes of treason. Against all odds, Adele must escape from the Pen and find her family, while being hunted by a deranged, killing machine named Rivet, who works for the President. She is helped by two other inmates, Tawni and Cole, each of whom have dark secrets that are better left undiscovered. Other than her friends, the only thing she has going for her is a wicked roundhouse kick and two fists that have been well-trained for combat by her father. At the other end of the social spectrum is Tristan, the son of the President and a sun dweller. His mother is gone. He hates his father. Backed by only his servant and best friend, Roc, he leaves his lavish lifestyle in the Sun Realm, seeking to make something good out of his troubled life. When a war breaks out within the Tri-Realms, Tristan is thrust into the middle of a conflict that seems to mysteriously follow Adele as she seeks to find her family and uncover her parents true past. In their world, someone must die."

As for me?  The book was okay.  The writing is pretty cheesy.  Proving again that just about anyone could write a book if they just take the time to sit down and do it.  The story is a neat idea, which is what attracted me to the book in the first place.  I could see this future actually happening.  The surface of the earth is destroyed and those who survive learn to live beneath the surface.  True, there are quite a few holes in the book (like where does water come from?  How do they keep the walls from collapsing in?)  It was hard to picture it in general - the miles and miles of underground.  All lit by artificial light.  The cheesiest part, of course, was the two main character's "love story".  They are drawn to each other by physical pain.  This was never explained why in the book, and from reading the next book's set up - doesn't look like it will be there either.

I say judge for yourself.  It is entertaining enough - good beach read or when there isn't much else on your shelf.  I read it for free on my Kindle through Amazon Prime, so no money spent.

Posted by PletcherFamily at 2:49 AM