Another book that was recommended by my husband.  No, he doesn't read terrible books.  He reads book I think are terrible.

There is a difference.  And he will tell you I have no taste.  Moving on. 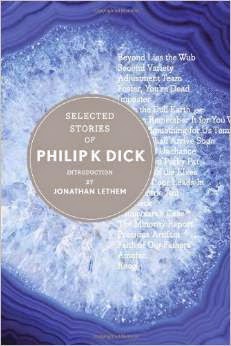 This was under the category:  A Book of short stories

Philip K Dick is a renowned Science Fiction writer.  I get that.  I understand that many movies such as Paycheck, Minority Report, Blade Runner, Total Recall, and The Adjustment Bureau are based on his short stories.  But it should be pointed out that they are LOOSELY based on them.  As in - maybe a word or two.  The rest was made up by Hollywood.

These stories were nothing but torture for me.  I have to admit it.  I am sure Sci Fi lovers will frown at that statement, but I need to tell the truth.  I didn't enjoy it.  Some of the stories were fine.  But nothing was great

I can't really do much more of a review for you because there were 20-30 stories in this book and they were all different.  They all had made up words of things Philip K Dick thought the future would be like.  He was wrong on a lot of levels.