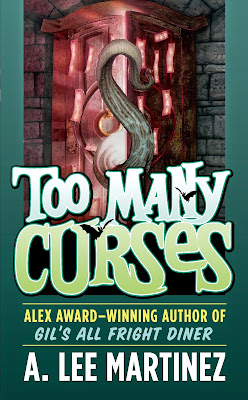 The Category was: Book with Non-Human Characters

This book was really cute.  I actually think my 12 year old daughter, Arlington, would like it.  It was funny and an easy read, and the main character was easily likable.  It starts out with a wizard named Margle the Horrendous who has a servant named Nessy who tends the castle.  Margle never kills anyone - but he turns all of his victims into various forms and locks them into his castle.  Nessy is in charge of the castle and all of its inhabitants (including "The Monster that Shouldn't Be" and "The Door at the End of the Hall" which apparently are terrifying).

Margle suddenly dies, and Nessy finds herself trying to care for the castle on her own.  Things start to unravel.  A dark Wizardess shows up and Nessy has to keep her from taking the castle and killing everyone in it.

The real strength of this book is the variety of characters.  They stay by Nessy's side, and most of the inhabitants love her as much as they despised Margle.

I think this is a great book and I highly recommend it.  It would make a fun summer read for just about any age.

Posted by PletcherFamily at 2:16 AM